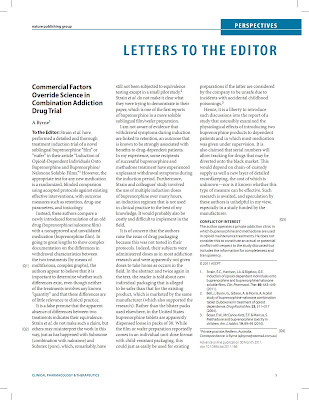 Clinical Pharmacology and Therapeutics ‘Perspectives’, Letter to the Editor.

Strain et al. have performed a detailed and thorough treatment induction trial of a novel sublingual buprenorphine “film” or “wafer” in their article “Induction of
Opioid-Dependent Individuals Onto Buprenorphine and Buprenorphine/Naloxone Soluble-Films.”1 However, the appropriate test for any new medication is a randomized, blinded comparison using accepted protocols against existing effective interventions, with outcome measures such as retention, drug-use parameters, and toxicology.

Instead, these authors compare a newly introduced formulation of an old drug (buprenorphine/naloxone film) with a nonapproved and unvalidated medication (buprenorphine film). In going to great lengths to show complex documentation on the differences in withdrawal characteristics between the two treatments (by means of
multifarious, complex graphs), the authors appear to believe that it is important to determine whether such differences exist, even though neither of the treatments involves any known “quantity” and that these differences are of little relevance to clinical practice.

It is a false premise that the apparent absence of differences between two treatments indicates their equivalence. Strain et al. do not make such a claim, but others may misinterpret such results in this way, just as has happened with Suboxone (combination with naloxone) and Subutex (pure), which, remarkably, have still not been subjected to equivalence testing except in a small pilot study.2. Strain et al. do not make it clear what they were trying to demonstrate in their paper, which is one of the first reports of buprenorphine in a more soluble sublingual film/wafer preparation.

I am not aware of evidence that withdrawal symptoms during induction are linked to retention, an outcome that is known to be strongly associated with benefits to drug-dependent patients. In my experience, some recipients of successful buprenorphine and methadone treatment have experienced unpleasant withdrawal symptoms during
the induction period. Furthermore, Strain and colleagues’ study involved the use of multiple induction doses of buprenorphine over many hours, an induction regimen that is not used in clinical practice to the best of my knowledge. It would probably also be costly and difficult to implement in actual practice.

It is of concern that the authors raise the issue of drug packaging because this was not tested in their protocols. Indeed, their subjects were administered doses as in most addiction research and were apparently not given doses to take home as occurs in the field. In the abstract and twice again in the text, the reader is told about new individual packaging that is alleged to be safer than that for the existing product, which is marketed by the same manufacturer (which also supported the research). Rather than the blister packs used elsewhere, in the United States buprenorphine tablets are apparently dispensed loose in packs of 30. While the film or wafer preparation reportedly comes in an individual unit-dose format with child-resistant packaging, this could just as easily be used for existing preparations if the latter are considered by the company to be unsafe due to incidents with accidental childhood poisonings. 3

Hence, it is a liberty to introduce such discussions into the report of a study that ostensibly examined the physiological effects of introducing two buprenorphine products to dependent patients and in which most medication was given under supervision. It is also claimed that serial numbers will allow tracking for drugs that may be diverted onto the black market. This would depend on chain-of-custody supply as well a new layer of detailed record keeping, the cost of which is unknown—nor is it known whether this type of measure can be effective. Such research is awaited, and speculation by these authors is unhelpful in my view, especially in a study funded by the manufacturer.

Conflict of interest.
The author operates a private addiction clinic in which buprenorphine and methadone are used in opioid maintenance treatments. He does not consider this to constitute an actual or potential conflict with respect to the study discussed but includes the information for completeness and transparency.

The response letter does not address most of the above nor does it do credit to its renowned authors due to its patronising invective. Copy on request.